Director on the front foot to take on the London Marathon

As millions across the UK were preparing to welcome in 2015 on New Year’s Eve, David Richardson, Persimmon Homes East Midlands finance director, was beginning 17 weeks of gruelling training for the London Marathon.

The 41 year old vowed to his wife Noreen, before she sadly passed away from cancer in 2011, that he would run the marathon in her honour.

Noreen had breast cancer and was treated and looked after in her own home by Peterborough Hospital’s Hospital at Home scheme.

David is now more than half way through a training regime to run the 26.2 miles of the London Marathon and has set himself a target of £2,500 to go towards the charity.

Based at Persimmon Homes East Midlands in Peterborough, the financial chief explained his reasons for choosing Hospital at Home, he said:

“The hospital helped me care for Noreen at home. They effectively set up a ward in my living room, we had a bed, drips and monitors all in the comfort of our home. It meant more people could come and visit Noreen and spend more time with her.

“Hospital at Home is an amazing charity. I cared for Noreen but they came in and gave their expert care and supported and advised us. It was of great comfort to the family and they helped us so much at what was a very difficult time.”

David said he has never run a marathon and most of his fitness came from playing football.

He had been set to take on last year’s London Marathon but injury ruled him out of taking up the challenge.

But now he is fighting fit and has been working his way up to the 26 mile mark since the turn of the year.

“Every week I’ve been adding an extra two miles to my runs and it’s not so much me being exhausted it’s more the longevity of the runs that I’m getting used to.

“I’ve never ran a marathon before, so this is new to me.

“There’s a mixture of excitement and nerves but my friends and colleagues have been really supportive and some have said they will be down on April 26 supporting me which gives me a great lift.” 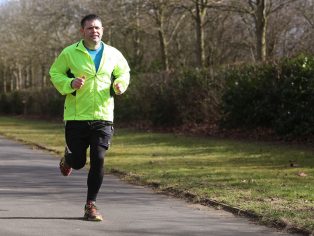