As the first phase of Edinburgh City Council’s 21st Century Homes project for much-needed affordable housing, the Gracemount development is showcasing sustainable construction. A major feature of the drainage solution is Hydro International’s high performance Hydro-Brake Optimum® to control surface water which saved the developers over 30% in storage construction costs.

Craig Milne, Director, Will Rudd Davidson, the consultant engineers for the project which is being developed by Cruden Homes. comments:

“We had been reviewing the options for vortex flow control systems for discharge attenuation, working with Hydro’s Design Team, I was able to demonstrate that the storage volume required could be reduced from 597cu.m. to 487 cu.m. when using the new Hydro-Brake Optimum®.

This meant that we could save around 30% in construction costs for the storage, which easily offset initial investment, so the decision to incorporate Hydro-Brake Optimum® was very easy to make. As a result we were able to rewrite the specifications for storage attenuation to submit to Scottish Water and Edinburgh CC’s Roads Department.”

On the 3.1 ha development surface water is collected from 1.9 ha of hard surfaces including roofs to 215 homes, all access roads and car parking for discharge to the public storm sewer. Discharge consent is set by Scottish Water at 4.5 l/s/ha, the equivalent of greenfield runoff, resulting in a total for the development of 13.5 l/s/ha, from the final total of 220 homes plus infrastructure.

In this tightly built-up location, with limited space for major landscaping features, the stormwater storage is divided into three. Hydro’s Stormcell® modular block storage system is installed under landscaping, 1500 mm concrete pipes under the access roads and large aggregate banks under the car park, all installed by Advance Construction Ltd.

“The arrangement of the twin attenuation units allows us flexibility to deal with the variations in rainfall that may occur due to climate change,” “Once one control is working at its maximum rate, the second unit kicks in. The capability enables the installation to cope with a wide range of event probabilities from 1 in 30 years to 1 in 100.”

The apartments and houses being built at Gracemount will be available for rent, shared equity and market sale. Their sustainable design focuses on low energy use and minimal carbon footprint, using high levels of insulation and advanced heat recovery systems.

The newly launched Hydro Brake Optimum® sets new performance standards for vortex flow control devices and achieves significant construction cost savings. By dispensing with the need to choose from a range of sizes and types the Hydro-Brake Optimum® instead offers built-in flexibility to size each unit for absolute fit. From now on, one type of Hydro-Brake®, the Hydro-Brake Optimum® perfectly balances flow rates and surface water storage requirements to suit each drainage project without approximation.

For more information about the Hydro-Brake Optimum® vortex flow control device and other Stormwater management products please call 01275 337937, email enquiries(Replace this parenthesis with the @ sign)hydro-int.com or visit www.hydro-int.com. 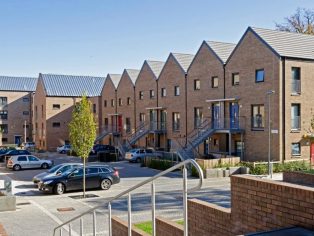