A charity set-up in memory of Harley Staples who lost his battle with leukaemia has been gifted a total of £5,500 by a leading regional builder.

Harley died in November 2009 after being diagnosed with a rare form of the illness 10 months earlier. His mother and father, Katherine and Jamie Staples, set up the charity after his death in the hope of creating a holiday home for other young cancer sufferers.

Persimmon Homes North Midlands was so touched by the work of the Harley Staples Cancer Trust that they decided to support it by naming a residential development in Bagworth ‘Harley’s Place’ in his honour.

They also offered to donate £100 to the charity for every home sold at Harley’s Place and have so far completed on all 55 of the 56 plots available in support of the good cause.

The trust also won £250,000 in a national charity competition set up by Persimmon Homes in 2012 which they aim to use to create their holiday home.

“We were delighted when Persimmon Homes North Midlands named their development in memory of Harley. To have received £5,500 on top of everything else they have done for us is absolutely fantastic and we cannot thank them enough.

“Persimmon Homes has shown us just how hard they work to help the local communities in which they build. Thanks to them, we have experienced amazing exposure, which is a real coup as we strive to spread our charity message as far and wide as possible.”

“We can’t think of a more worthwhile cause to support than the Harley Staples Cancer Trust.

“We are delighted to have raised so much money for the trust and we will continue to pledge our support for them through other fundraising activities.”

Harleys Place, off Jackson Road, in Bagworth, is a development of 56 two, three and four-bedroom homes. There is just one four-bedroom plot remaining for sale priced at £199,995. 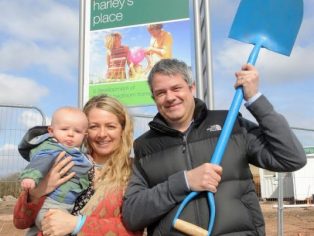