The UK’s largest flooring contractor, Designer Contracts, has pledged a whopping £100,000 to help a hospice close to its headquarters in Chesterfield.

The company has donated the six-figure sum to Ashgate Hospice’s ‘Three Bedded Bay Appeal’, launched to raise money for renovations to its cramped patient bays. The transformation will see the space turned into nine single bedrooms, providing patients and their families with more of a home-from-home environment and much needed privacy.

“We’re really thrilled to be able to continue supporting Ashgate Hospice. Last year we helped to refurbish the family room and some counselling rooms, so it is a pleasure to be able to contribute towards further improvements that will benefit future patients and their families.”

Designer Contracts was recently named in the Business Reporter’s Best of British Campaign, which recognises success stories in British business. The accolade was awarded to just 10 companies in the UK.

The company operates across 15 UK regional facilities. As well as flooring, the company provides curtains and blinds, furniture and lighting, and operates a showhome and contract-focused interior design services division. 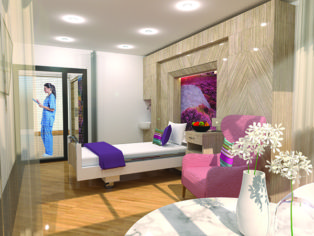