A new production facility for the south-east has been opened by Crendon Timber Engineering.

The 1,700m² factory at the company’s site in East Harling, Norfolk, manufacturing trussed rafters and Posi-Joists, is the latest landmark for the company which celebrates its 50th anniversary next year.

The plant at East Harling, one of six production facilities in the UK (Crendon also has an estimating and design office in Bristol), was officially opened on September 9th by an equally pioneering person.

South West Norfolk MP Elizabeth Truss is not only the Secretary of State for Justice but also the first female Lord Chancellor in the 1,000-year history of the role.

The new East Harling depot will offer a full design and manufacture service for roof trusses and Posi-Joists along with a distribution hub for the south-east of England including East Anglia, Kent and Surrey.

“In an industry where the reliable supply of quality materials to site is a key consideration for buyers, the opening of our new world-class manufacturing facility in East Harling is just another example of the investment we feel our customers deserve.”

He invited regional housebuilders and local building contractors to the plant to see,

In the past 40 years the use of trussed rafters has grown exponentially and it is estimated they now account for 95 per cent of roofs for the housing market with significant inroads into the commercial market.

In recent years Crendon has steadily increased its product range to include panels, spandrels and the full range of Metsa Wood engineered-wood products. All of these can be offered regionally on a design, supply and install basis. 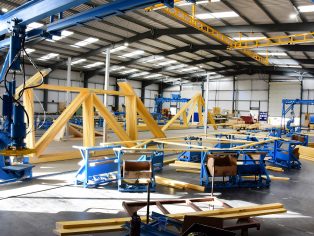