A County Durham town is to get 40 new affordable homes as part of a £30m investment programme, creating more than 100 new jobs and apprenticeships.

The new properties in Crook will include two and three bedroomed houses, as well as two and three bed bungalows. Contracts have been signed for the project at West End Villas, in the heart of the town, which is being delivered by a partnership comprising one of the region’s largest landlords, County Durham Housing Group and Galliford Try Partnerships North.

Featuring high levels of insulation, the latest heating systems and double glazing, the new homes are expected to bring big savings to tenants when compared with older homes, particularly those in the private rented sector.

Construction work is expected to be completed in stages during 2018, with the first families moving in shortly after. All of the new homes in Crook will be available for affordable rent.

“We all know that demand for affordable homes is really high right across the country at the moment. This new project in Crook will help to deliver new, high quality homes to families that really need them.

“We’re particularly pleased to be developing bungalows for customers that need them too. As a social landlord it’s great to be able to build homes that the private sector would not ordinarily be able to deliver.”

Tom has recently been promoted to the role of Development Manager, after starting out as a Business Administration Apprentice just four years ago. He has led the work to deliver the Crook project, ensuring the new homes are high quality and represent the best possible value.

“I went to university after sixth form, but it wasn’t for me. The apprenticeship worked out much better; it’s given me lots of variety and opportunities to learn and develop further.

“In this role there’s always something new that crops up on a daily basis, which keeps things interesting and there’s a tangible outcome to the job by delivering new affordable homes.”

The Crook properties are part of a major house building project by County Durham Housing Group that will see almost 300 new homes built on 17 sites stretching from rural Weardale to the Durham coast.

Galliford Try has contributed £1.2 million to the Crook project from its 2015-18 Affordable Homes Programme (AHP) grant, secured from the Homes and Communities Agency.

Another rising star of the sector, Jake Robson, has played a key role in the project for Galliford Try. Determined to forge a career in construction, Jake could only find work as a building site labourer when he left school with A levels, following the financial crash.

However, his perseverance eventually secured a role as a trainee in the Commercial Department at Galliford Try Partnerships North four years ago. A year and a half later, he transferred over to the Development Department with the aim of bringing new business to the company.  He is currently in the final year of a degree course in planning and real estate development – which he is completing on a part time basis – with funding and support from his employer.

After representing the company at the signing of the contract for the Crook Development, Jake said:

“This has been the first project I have managed from inception through to getting the contracts signed with a new client.  It has been a real learning experience aligning their requirements with our proposed scheme.  I will keep a close eye on the project as it develops.  I get a real sense of pride when I see developments completed and really look forward to seeing residents moving in once they are built.

“Working closely with housing provider partners to improve the quality and choice of homes across the North East is a core aim and we are delighted to have been selected to deliver this project.” 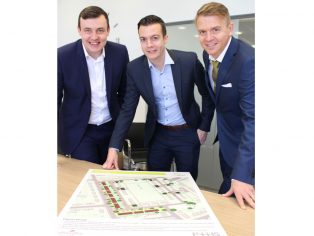 Jake Robson from Galliford Try and Tom Winter from County Durham Housing Group, plus Mike Clark from WSP, look at the plans for the Crook development.