A regional builder has begun work on 60 new homes on the former Kuehne and Nagel UK brownfield factory site in Dudley helping to create around 180 local jobs.

Persimmon Homes West Midlands has now launched Saltwells Mount, with several of the new homes sold in a matter of weeks since its launch. It is hoped the first residents will be able to move in in October.

The builder agreed the purchase of the site, off Saltwells Lane, late last year after gaining outline planning permission. Enabling work has already been carried out, with a derelict 100,000 sqft storage and distribution unit being demolished to make way for the properties.

“Building work is now well under way, and we have launched the site with several plots released, starting at £137,500 for a two-bedroom mid-terrace house.

“We are experiencing a lot of interest, as there is a strong need in the town for new homes and we aim to provide a diversity of house types to suit all needs. People will be able to buy off-plan, which means they can have the first pick of the plots and a greater say over the finishing touches.”

Persimmon Homes is building a mix of two, three, four and five-bedroom properties, which will include five affordable homes.

The attractive 4.2 acre site adjoins woodland in the Saltwells Nature Reserve, which covers 247 acres, and is an area of outstanding natural beauty. The site is also adjacent to the chainmakers’ hamlet of Mushroom Green and the Mushroom Green Conservation Area and is within walking distance of Merry Hill Shopping Centre. 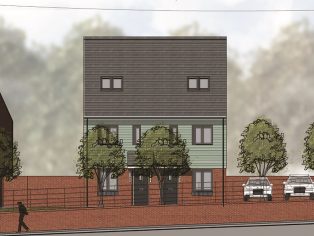