A brain tumour charity is to benefit from a cash boost gifted by a regional home builder.

The Lewis Moody Foundation has received £1,000 from Persimmon Homes Wessex to raise awareness of the symptoms of brain tumours and to ensure early diagnosis.

The charity was set-up by former England rugby captain, Lewis Moody and his wife Annie after meeting promising young rugby player, Joss Rowley Stark, who died of a brain tumour in April 2013.

The donation comes as part of the housebuilder’s Community Champions scheme, which sees a pot of £24,000 given out to local good causes throughout the region.

“We are overwhelmed by the donation given to us by Persimmon Homes Wessex. The money will go towards helping families that are affected, offering days and one-off experiences for children and their families as well as funding scientific research through The Brain Tumour Charity.

“The Lewis Moody Foundation funds ground breaking research to improve the diagnosis and treatment of brain tumours and gives families a day out of the ordinary to lift spirits and create special memories. It’s because of contributions such as Persimmon’s that we are able increase our understanding, develop new and better treatments and ultimately save lives.

“We are delighted to be donating this money to a very special charity. This illness can be catastrophic not only for the victims but for the families too. We hope our donation money will help bring some much needed relief to those affected.

“We now want to hear from more groups and charities as we look to allocate more funding over the next month. All we ask is that the group or charity has already worked hard to raise money themselves, and we will then match this effort with funding of up to £1,000.”

To apply for funding, visit www.persimmonhomes.com/charity. 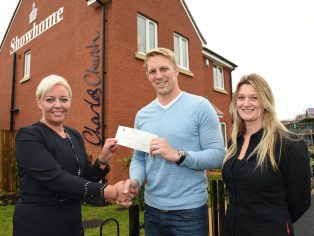