Ruth Armstrong has nothing but praise for her new home at Taylor Wimpey’s Diglis Water development in Worcester.

The 60-year-old has downsized to a brand new two-bedroom apartment with a stunning view of the River Severn, and says it’s just ideal for her.

Ruth, who was widowed six years ago, previously lived in a four-bedroom detached house in a village near Nottingham and decided to move to Worcester – where her brother and sister both live – after her mother passed away just before Christmas 2014.

“I wanted to move to a two-bedroom flat in Worcester, so I wandered around and looked on websites which led me to Diglis Water,” she recalls. “The location was perfect, the price bracket was correct and that’s all it took, really.

“My husband died six years ago but I couldn’t leave the village where we’d lived because I still had my mum and I don’t think it’s fair to move old ladies. After she died though, I was able to move to Worcester to be near my brother and sister.”

Ruth moved into her new apartment in June 2015 after selling her old house and is making the most of the advantages which come with downsizing to a brand new property.

“There’s only me now, so I don’t need four bedrooms,” she says. “I’ve got a guest bedroom when people come to stay and it’s easy to keep clean. Everything is nice and new and it’s warm and cheaper to run.

“I’m not that fond of gardening, but having a balcony – which has a lovely view over the river – provides the perfect balance. For me it’s just ideal.”

The location of Diglis Water is also just right, as the development is within walking distance of the city’s many amenities, which Ruth is enjoying.

“I’m having a wonderful time,” she explains. “I do like Worcester. It’s an easy walk to everything I need: good shops, restaurants, a cinema, and there’s walking and cycling too.

“There are some people here who have downsized like me, but there are others who are young single people or couples. It’s a very mixed group of people which is really rather lovely. It takes a while for a new community to take shape, but it’s coming together nicely.”

The stylish waterside homes are close to the bustling bars, fashionable restaurants and lively entertainment venues of Worcester, a thriving and modern city that boasts all the conveniences of 21st century living. Along the High Street, The Shambles and Broad Street, visitors will find a diverse selection of chain stores and boutiques.

Diglis Water’s Waterfront Park and floating river pontoon provide an attractive recreation space for residents and visitors, with appealing views over the river and meadows. A health and fitness centre is also located on site, while the many mooring opportunities are frequently full to capacity with narrow-boats.

The development lies just a short distance from junction 7 of the M5 for quick links to the M4, M6 and M45, while the new homes are less than 1.5 miles from Worcester’s two railway stations for services to Birmingham, London, Oxford and Bristol. 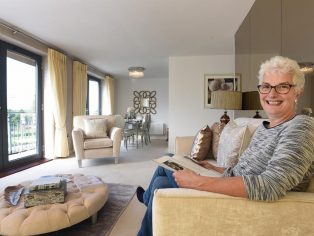