This weekend the most prestigious racing event in the calendar comes to Silverstone, as Britain hosts the Formula 1 Championship.

Britain’s most established online estate agent, eMoov.co.uk, has taken a look at how the British property market has changed over the years a Brit has won the race.

Since Stirling Moss was the first to do so at Aintree back in 1955, a British driver has won the British Grand Prix 22 times. Back in 1955 the average house price in the UK was just £1,928, since then it has increased by 9680 percent to today’s prices.

When Jackie Stewart won his first British Grand Prix at Silverstone in 1969, the average house price in the UK had climbed steadily to £4,222. When he repeated this success again in 1971, prices had climbed another £884 to over £5,000.

James Hunt was the next Brit to win in 1977, since which point the UK average house price has increased 1373 percent from £12,805 to the present day.

By the time Nigel Mansell clinched his first win at Brands Hatch 15 years later, property prices in the UK had shot up by £32,500. Mansell won the following year and again in 1991, with house price following his success increasing to £54,626 in over the same time period. However this consistent growth soon ended, falling £2,811 from 1991-1992 when Mansell won his last British Grand Prix, a 264 percent difference to the average UK property price today.

This drop continued in 1994 and 1995, when both Damon Hill and Johnny Herbert both claimed their first win at Silverstone. However this downward spiral was soon ended with Coulthard’s first British Grand Prix victory in 1999, by which time the average UK house price had jumped some £20,000 in four years to just over £71,000.

Since Coulthard’s last win in 2000 house prices have increased a further 165 percent despite bringing a seven year drought of British winners, until Lewis Hamilton put that to rest in 2008. This was the same year Lewis won his first F1 title after coming second the previous year in his debut season. By this time the average UK house price had more than doubled from 2000, to £168,973. When Lewis went on to claim his second Silverstone victory last year, before going on to win the championship for a second time, this price had climbed further to £185,620.

With house prices continuing to rise by 2 percent since last year, everything is in place for Lewis to repeat his success of 2008 and 2014, should he win at Silverstone this weekend.

“Things have changed dramatically in the UK since Stirling Moss first made the podium in 1955, both in F1 and property. It really is mind boggling to think a property back then was under £2,000. Of course this was the equivalent to about £50,000 in today’s money, but still a darn site cheaper none the less.”

“This said I don’t think today’s drivers will be to hard pushed to climb the property ladder, but if a British driver does wins at Silverstone this weekend, we’ll happily sell their house for free.” 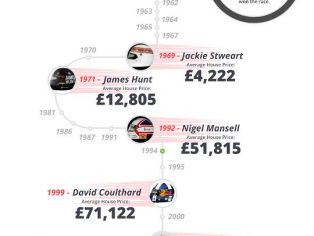