The Brick Development Association has announced that nominations for the 2016 Brick Awards are now open to architects, designers, building owners, developers and housebuilders, to contractors and brick manufacturers.

This year’s ceremony marks the 40th anniversary of the event and will consider fifteen categories celebrating brick use in housing, commercial and public projects. It will also cknowledge exceptional technical prowess in brickwork.

These categories are open to all entrants for projects featuring clay bricks and pavers manufactured by BDA members with the exception of The Worldwide and International Award.

Innovation, sustainability and architectural design are key components that judges look for each year as well as the creative use of brick as an aesthetic building material.

For the chance to be included in the 40th anniversary edition of the awards, enter online via the BDA website, click here, or contact the BDA on 0207 323 7030 and an entry form will be sent out. 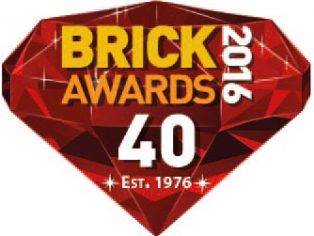