Construction group BAM has been chosen to build Two Chamberlain Square, the second building in the first phase of the Paradise development.

The 183,000 ft² building is due for completion in 2019, shortly after One Chamberlain Square, and is being constructed on a speculative basis.

The Glenn Howells Architects design will feature elegant columns to reflect the architecture of the Town Hall, as well as full-length glazing with unrivalled views over Chamberlain Square. Opening out onto the redesigned public realm, Two Chamberlain Square will bring the public space to life, complementing some of Birmingham’s finest civic buildings including the Town Hall, Council House and Birmingham Museum and Art Gallery.

The enabling and infrastructure works for both buildings is already underway, with piling for the foundations for Two Chamberlain Square currently being drilled up to 20 metres into the ground. BAM will begin construction of the building itself in September 2017 following the completion of two levels of basement.

“Our confidence in Birmingham is such that we are pushing ahead with the speculative development of Two Chamberlain Square. Paradise will transform the centre of Birmingham and we are excited to announce that BAM will be beginning construction next year ahead of a scheduled completion in 2019.”

Argent, the Development Manager for Paradise, has worked with BAM extensively. The contractor built seven of the eleven buildings at Brindleyplace, as well as buildings at its King’s Cross regeneration scheme.

“BAM has a fantastic track record, which we’ve experienced first-hand at Brindleyplace and King’s Cross. In this case we were really impressed with the team’s understanding of the unique constraints of the Paradise site which is vital to the successful delivery of Two Chamberlain Square.

“This building, alongside One Chamberlain Square, is set to be one of Birmingham’s most impressive and is further evidence that exciting things are happening in the city. We are looking forward to working with BAM to bring Two Chamberlain Square to life.”

“The confidence to move ahead with prestigious new offices at Two Chamberlain Square is a truly positive sign for the region’s economy.

“BAM has a great deal of experience building striking developments in Birmingham, and we’re delighted our expertise working with Glenn Howells, BAM Design and Arup has afforded us an opportunity to help deliver this exciting development. Argent and BAM started our industry leading partnership in 1994 with the first new building at Brindleyplace in Birmingham and have now delivered over 30 iconic and award winning buildings together.”

Construction of One Chamberlain Square is already underway, with completion expected in autumn 2018. The public realm enhancements to Chamberlain Square will also be implemented during this period and Two Chamberlain Square will complete in early 2019. BAM has been appointed by a JV between Hermes Investment Management, the £28.6 billion manager focused on delivering superior, sustainable, risk adjusted returns to its clients – responsibly, and Canada Pension Plan Investment Board (CPPIB), a professional investment management organisation that invests on behalf of 18 million Canada Pension Plan contributors and beneficiaries.

The Paradise redevelopment is being brought forward through Paradise Circus Limited Partnership (PCLP), a private-public joint venture with Birmingham City Council. The private sector funding is being managed by Hermes Investment Management which has partnered with Canada Pension Plan Investment Board (CPPIB) on the first phase of the development.

Argent is the development manager. 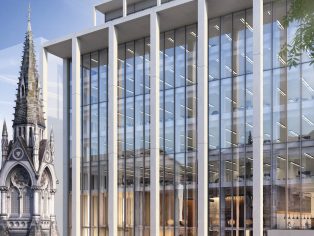