Triton, which won the PCA’s Innovation and Sustainability award for the pioneering subscription of its systems to the new NBS BIM Library, supplied the waterproofing system components. These included 1,000m2 of cavity drain membranes – which were installed to the inner surface of all exterior walls, Aquachannel drainage conduit which was installed to the perimeter, and associated sumps and pumps. The design of the drainage system was based on a gravity feed to existing outlets. Together these components provided an effective Type C waterproofing system as defined by BS 8102.

The system was installed by Preservation Treatments, winners of the PCA’s Contractor of the Year award. Following completion of the cavity drain membrane system, 300mm of insulation was laid to the floor before the installation of a 20mm floor membrane, which was then sealed to the wall membrane and a screed finish.

An independent dry lining system was then put in place to form the walls of the apartments. Preservation Treatments will also carry out external waterproofing works in the new build section of the development later in the project. 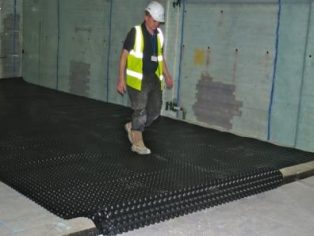