It’s a double celebration for Elan Homes employee Andy Ryder who’s picked up an award in the equivalent of the Oscars for site managers, 30 years after he began chiselling out a career as a joiner.

Pride in the Job is the only awards event that focuses on the contribution of site managers in producing high quality new homes.

Andy was selected from around 15,000 site managers across the UK to win one of just 450 ‘Quality Awards’ and ‘Single Home Commendations’.

“I started work in the construction industry when I was just 18 and trained as a joiner. I’m now 48 and throughout my career have won awards from local authorities but haven’t won the Quality Award until this year. I’m thrilled as it shows that my hard work has paid off. All of the contractors are made up too as it was a real team effort.”

Judging for the awards is meticulous, beginning a year before the announcement of the first round of winners. It includes spot checks of the day-to-day running of their site plus assessments across 38 areas of site management, including their technical knowledge, consistency in the build process, leadership and organisational skills.

Only site managers who demonstrate exceptional standards in every aspect of their work on site and in the homes they build will be considered for a Pride in the Job Award.

Andy will have to wait until a regional award ceremony in October to find out if he’s achieved the next level, the coveted Seal of Excellence. These are awarded to the top 130 site managers nationwide. 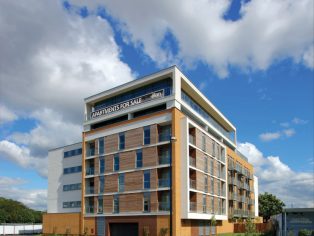 Andy Ryder has been awarded a National House Building Council Pride in the Job ‘Quality’ Award for his work at the X1 Saltra apartment scheme at Salford Quays.