Midlands housebuilder Avant Homes has purchased 11.5-acres of land to deliver a £35m development of 135 design-led homes in Desborough.

The new development will feature a collection of two, three and four-bedroom properties across 16 house designs.

Of the 135 homes, 30 per cent will be designated to affordable housing. The developer will also make a community contribution of £1.4m towards the local area including education, public open space and play areas, highways works, town centre improvements, libraries, and public transport.

Initial groundworks are due to commence in the coming months with the first homes set to be launched for sale in autumn and the showhome to follow shortly after.

The first residents are expected to move into their new homes at by the end of 2022. The total approximate build length of the development will be three and a half years.

“We’re very pleased to have acquired this land and see our plans approved to deliver the 135-home development.

“Desborough is a highly desirable location, and our development will form a natural extension of the residential area west of the town centre. We look forward to moving our plans forward with the commencement of groundworks at the site in the coming weeks.”

The site is situated just a mile from Desborough town centre which has an abundance of schools, supermarkets, and restaurants. The development is also located within easy reach of Market Harborough and Kettering train stations, giving access to major towns and cities including London, Leicester and Northampton.

Based in Nottingham, Avant Homes Midlands is part of the Avant Homes group, one of the leading private developers of residential property in the UK. The group currently has 57 developments across its five operating regions.

Avant Homes Midlands has nine developments under construction stretching from Brailsford to Kettering. 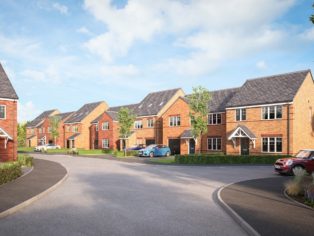