Michael Goddard, director of housebuilder Caplin Homes, assesses some of the challenges of the renewable technologies available to housebuilders and explores how a new application could change the future of eco building.

Structural building design has improved dramatically in recent years and the cost of renewable technologies has dropped significantly. In spite of this, zero carbon homes are still far from the norm, with many housebuilders finding the costs and complexity of suitable systems prohibitive.

Renewable technologies such as solar thermal, PV, ground or air-source heat pumps and biomass boilers can all considerably reduce the carbon emissions from a building project.

However, these technologies don’t come without their problems. Until recently, to meet zero carbon, the building industry had to rely on a variety of technologies, each with their own control systems drawing on different renewable sources. Such systems have not only proved too expensive but also often rely on seasonal shortfalls being made up by power from the grid, in return for over-generation during other periods.

Ground-source heat pumps draw the heat stored below the underground frost line and transport it via the heating system to the house interior. Due to the lower temperature of the heat been drawn upon, these are best suited to new builds where under floor heating can be specified instead of radiators. However, installation can often be complex, requiring extensive space or costly specialist drilling equipment.

Air-source heat pumps use the same principle but extract heat from the air rather than the ground. As such their installation is far simpler and cheaper, but the available heat is not constant and therefore, not always reliable. They also suffer in our damp winters from icing, requiring reverse cycling which degrades performance.

Solar PV is one technology available which allows homeowners to generate their own electricity. Although most domestic heating systems run off gas, if an immersion heater is installed alongside the solar PV, this technology can also help with hot water production. A solar thermal array can also be used to heat water, thus allowing a homeowner to make considerable savings on their energy bill. However, unlike PV, which can work even on a cloudy day, solar thermal requires direct sunlight, so the climate in the UK is less than ideal for maximum efficiency.

Photovoltaic-Thermal (PV-T) requires around 35 per cent less roof space to produce the same amount of energy as separate PV and thermal arrays and costs less to install. But again, it isn’t without problems, mainly in its practical application. Similarly to solar thermal, PV-T generates the majority of its energy in summer when minimal space heating is required.

Although homeowners can direct any surplus energy generated in summer back to the National Grid for a financial gain, they will still be left with the problem of under-generation in winter and therefore, remain reliant on power from the grid. PV-T panels also have an internal contradiction in that they are required to maximise their temperature to heat water yet produce less electricity the warmer they get.

The most significant hindrance with solar sources is the lack of an economical method of thermal energy storage. However, a patented inter-seasonal heat store known as the Earth Energy Bank (EEB), which is installed within the footprint of a building, can now provide the ideal solution.

The EEB is one of the three core technologies that make up the new energy system, Zero Carbon Solution (ZCS). Together with hybrid PV-T solar collectors and a water-water heat pump, this sustainable system can meet a building’s full heating and hot water requirements all year round.

First and foremost, thermal energy collected from the PV-T array is used to meet any immediate heating and hot water needs, while electrical energy powers the system’s heat pump with any excess available for lighting and ventilation, as well as additional water heating via an immersion coil.

An integrated system carefully measures the temperatures within the property and its hot water cylinders to determine requirements before directing excess energy via the heat pump to warm the EEB.

Housed between a building’s foundations, the EEB’s design utilises the poor thermal conducting quality and high thermal capacity of the ground. When drawing upon the EEB, the heat pump also operates more efficiently, as the raised ground temperature creates a lower differential between the source and output temperatures. Furthermore, the heat pump is eligible for the government RHI.

The storage system itself consists of a matrix of boreholes that are just 1.5 metres deep. Unlike the collectors used with ground source heating systems, the EEB doesn’t require any long trenches or specialist deep drilling equipment, reducing installation costs and making it more practical for larger-scale housing developments, where space may be at a premium.

As Zero Carbon Solution demonstrates, solutions to the problem of inter-seasonal storage are available, and consequently zero carbon can be achieved. With the correct application of selected integrated technologies, a zero carbon status is attainable through a unique system that is not only cost effective, but also simple and easy to install. 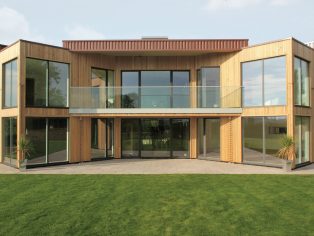