A lofty solution to make the most of space, easily

One sure thing in the housebuilding industry is that land is a finite resource. Thus, we are now seeing a prevalence in building downwards to gain space in basements. But why make life harder than it needs to be?

Going underground is full of pitfalls, and adds significantly to the cost. Yet every dwelling – from individual homes through to apartment blocks – has an overlooked and undervalued resource – the roof.

There is also more building on brownfield sites, and infilling, where the surroundings impact to a higher than usual degree on building design. Homes have to be designed that are as unobtrusive as possible – and that often means going flat.

In the UK, we have what verges on an obsession with building homes with triangular pitched roofs, and then not using that space efficiently – only as storage. We will design and build apartment blocks with flat roofs, but even then the roof is not perceived as part of the accommodation but a means of hiding the building services from obvious view.

It is rare we optimise this space, yet with land increasingly at a premium, it is the most cost-effective solution to gaining square metreage. And it can add architectural interest.

Maybe surprisingly, 23 per cent of Britain’s existing dwellings already have at least some part of the roof that is flat/low pitched. Current consumer demand is for maximum natural light and open plan living. So why, for example, do developers and designers not combine this with cost-effective construction?

By definition, the steep roof with windows creates an additional floor of habitable space and reduces the overall height of the roof for a given number of habitable storeys. Mansard in Europe also means the attic (garret) space itself, not just the roof shape.

The mansard and gambrel styles make maximum use of the interior space of the attic and offer a simple way to add one or more storeys to an existing (or new) building without major cost or disruption. They still have a degree of pitch to the vertical facade, to satisfy the traditionalists and ‘soften’ the line.

In their heyday, in the 19th century, mansards and gambrels used convex or concave curvature with elaborate dormer window surrounds. Maybe we need to learn from our past, begin our own Renaissance and resurrect the principle more in today’s building.

Similarly ‘vintage’ is the use of a flatter roof with vertical sections, a ‘sawtooth’ style. Historically it was predominantly used in industrial buildings, but, with our redevelopment of old factories and wharfs, it has found its way into retro design approaches, with the northlights ensuring an abundance of natural light in the interior. There is no reason why the style should be confined to refurbishments and why it could not cross over into new build, to add useable space and architectural interest.

We could also consider turning the concept of our traditional pitch inside out, into a ‘butterfly.’ The upper angle of the outer edges allows larger windows to be used. This gives the home more natural light, lower heating bills in the winter and brings an open feel to the design. It also lends itself to an environmentally friendly home design, as PV solar panels, water collection systems and natural light can all be easily incorporated. The internal valley facilitates drainage.

The way to genuinely maximise space in the same footprint, however, is to use a flat roof. Basic mathematics proves that the resulting square or rectangle delivers more internal capacity than the traditional pitched (triangular) roof.

As well as living space, lower inclines through to flat roofs have other benefits. With mounting electricity costs, a flat roof provides a useful base for PV panels. Solar systems can of course be mounted on pitched roofs, but more can be accommodated on the same-size flat roof, as the panels themselves can be inclined. Several social housing providers are already applying this principle on apartment blocks. Why not extend it through to homes?

We all acknowledge the need for green spaces, for the benefits to user wellbeing, and the environment in encouraging wildlife and facilitating drainage. Flat roofs make ideal green spaces, if properly designed and specified.

Flat roofs were avoided in the past because of the perceived problems installing and maintaining them. Modern materials bear little resemblance to those that earned flat roofing such a bad name a few decades ago.

Today’s single ply membranes help deliver the energy efficiency requirements laid down in Approved Document L and in the Green Guide achieve a A+ rating. Properly installed, there will also be fewer potential site remedials/ snagging than with a tiled roof with mortar-bedded ridge and eaves.

Flat roofing is beginning to penetrate the housebuilder sector beyond the individual, the self-builder. Lovell, for example, has used the principle in Blackpool, where two new three storey blocks at Queens Park feature an innovative design approach whereby apartments on different floors can, in the future, be merged to create a three-bedroomed house. Benn Bailey Homes has rapidly sold off-plan a cul-de-sac of £500k+ contemporary homes that featured flat roofs; satisfying the site’s locality near a nature reserve and in a valley so overlooked by existing properties. 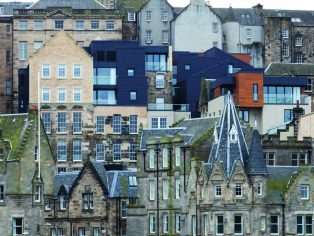 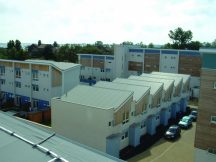