A big eco ambition on a small site

Five new ‘eco’ homes have been completed on a ‘micro site’ in Enfield, which combine environmental efficiency with a traditional feel. Nic London, of SME builder and developer NLondon Construction, spoke to Jack Wooler.

To the north of the capital, the London Borough of Enfield is the recipient of five new highly energy efficient homes, constructed by NLondon Construction in Bush Hill Park.

Overlooking Enfield Cricket Ground, the bespoke-built terrace in Lincoln Road has been built to stringent energy specifications, offering an electric-powered heating and energy system, powered in part – and sometimes in full – by a combination of discreet solar PV panels and a battery storage system.

The homes are deceptively large – approaching through low-maintenance landscaped front gardens with off street parking, the new micro development doesn’t immediately give away the scale of the interiors. Each unit houses four large double bedrooms, a reception room, luxury kitchen, and three bathrooms – one of which in each property offers a wall-mounted TV by the bath. In addition to an innovative energy system, each also has an EV car charger, and private garden to the rear.

These luxury fittings are supplemented with a ‘hassle-free design,’ which includes low maintenance specification in the gardens, the intelligent energy system, and 10 year Build Assure Warranty, ensuring residents’ stability for years to come.

An ethos of efficiency
When discussing the process behind these homes and the offerings with Nic London, construction manager at NLondon Construction, it soon became clear that an ecologically-driven focus on energy-efficiency was vital to the development process; it’s also an integral part of this particular professional’s ethos.

“As a builder and developer, all my life I’ve tried to use or introduce as many eco products into our builds as I can,” said Nic. The first house the firm built, in 2012, was made from highly insulating hemp block and lime mortar inside a timber frame, for which they won a couple of awards, and NLondon has even produced its own hemp products.

However the company decided not to propose such a pure ‘eco’ fabric for the Enfield scheme, after NLondon’s experiences with promoting its hemp blocks at the Grand Designs consumer trade show. “People have still got this mentality about bricks and mortar, as soon as you say timber frame they’re not interested, they want classic.” He says that as a result, the firm’s thinking was, “how can we build this development in a traditional style, while still offering some eco-advantages?”

Their answer to this question was a renewable energy ecosystem provided by The Phoenix Works, involving a high efficiency solar PV system, a Tesla Powerwall home battery, and an air-source heat pump – all built in the classic brick and block build that NLondon’s audience is after.

With no need to connect to the gas grid, the heat pump meets all of the properties’ heating needs, both in terms of hot water and underfloor heating – the system is able to heat 250 litres of hot water in 35 minutes from cold. This is then powered by a mix of the renewable energy the home itself produces, supplemented by green electricity from the grid supplied by Tonik Energy – the former generated via the solar panels and then stored in the 14 kWh battery for either direct or later use.

Further eco elements of the properties include recycled plastic roof tiles and composite decking, LED lighting, and a home chargepoint for electric vehicles, all allowing residents to live comfortably while potentially reducing their carbon footprint dramatically.

Though it lacks the highly-insulated hemp structure of the firm’s previous schemes, the building also still held up extremely well in terms of U-values, with the BRE approving the site and awarding it an A+ rating.

Making money off the grid
The whole-house energy system provides many more benefits than just its ecological offerings, particularly in helping potential residents to exist ‘off-grid’ thanks to the solar array. “Pretty much most of the day – especially if it’s particularly sunny – you can run just off of the solar panels from morning until the following morning, working off-grid,” said Nic. “Even if the weather’s bad, you could still be off-grid until night time.”

“As well as being very efficient, the system’s very intelligent,” Nic explained. “It works everything out for you, and you can see what it’s doing through the app.” The developer pulled out his phone to demonstrate this, the app showing home was producing 1.6 kW, fluctuating up to around 2 kW – it being a relatively cloudy day. The battery was at around 29 per cent (by 11:30 am), so, said Nic, “if it stays like this, by about 3 pm we should have the full 14 kWh stored.”

The app also showed the system intermittently sending some electricity back to the grid. “If the loading is too much,” explained Nic, “it’ll send some back, even while you’re still charging the battery.”

The builder estimated that energy bills are going to cost between £600-800 per annum, which for four double bedrooms would be a significant saving on ‘normal’ houses – especially when accounting for the money paid out under the Feed In Tariff (FiT), and the fact that the gas bill is non-existent.

As he showed off the solar panels, placed discreetly along the front roofing tiles, Nic lamented the recent changes in Government policy “that will halt builds like this in the future,” namely the ending of the FiT on 31 March this year. “We got there just in time to qualify for FiT payments, which is worth around £70 per year. If you install a system like this now, though there’s lots of financial benefit to generating, storing and using your own electricity (more than £300 per year at current electricity prices), unfortunately there’s no FiT payment.

He continued: “So if anyone wants to do this in the future, there is less incentive for them. It’s a real shame, and unless they re-introduce something, then I think not as many people are going to do this.”

More positively, since our visit, there has been hopes that the Smart Export Guarantee (SEG), the Government’s replacement scheme for FiT set to take effect by 1 January 2020, will tackle this likely downturn in adoption to some degree, but at the time of writing the information was not final.

The recurrent theme, as so often seems the case, was the planning system. It took the company two years and eight months to get planning which, with the project taking nearly five years to complete from start to finish, meant that over half of the time spent was in the planning stages.

“It is an absolute nightmare,” said Nic, having worked with planners for over 30 years. “There’s a lack of resources; they haven’t got enough senior planning officers, and because of this, micro sites just aren’t their focus – in order to meet Government targets they tend to focus on the big stuff.”

He continued: “If you can get a site with over 1000 units on it through, it’s much easier to reach the targets, leaving behind hundreds of small micro developments.” As “small fry” in the grand scheme of things, Nic revealed that “you can’t talk to planners any more – the only contact you can have is via email.”

He continued: “Before, you used to be able to walk into a planning office and see a duty officer, discuss things, or you’d make an appointment to see the planning officer in charge of your case; now you can’t even ring them.”

The current process of requesting an appointment by email can reportedly take around 10 days to get a response, and then a month or two before you get to speak to anyone – even on the phone.

He puts this in part down to the 2008 financial crash, when “they basically got rid of all the planning officers” as a cost-cutting measure, on the pretext that there were a lot fewer plans going through. “But obviously in the last five years,” he added, “things have picked up, and they just haven’t got enough people to cope with it all – and it’s hard to replace them, because they’ve all gone to private consultancy work or gone abroad, you’ve lost them.”

Acquiring land was the other key issue, as an SME, he said. With the much-cited shortage of smaller sites, it is often difficult to find places to build on this smaller scale.

According to Nic, this is partly because volume developers are purchasing large swathes of land by doing deals with landowners (e.g. local authorities or TFL), “paying peanuts for the site in return for a couple of roundabouts, a few roads or some traffic lights.” “They’ve got big sticks,” he asserted. “They can beat them!”

The price of quality
Despite such barriers, NLondon has succeeded in bringing the development to completion, offering a select few in Enfield a new way of living, and providing a benchmark of what can be achieved in SME eco-design.

Of course, however, all of this comes at a price – around £800,000 – though this is not far off the benchmark considering its London suburb location plus great transport links, as well as its size, the luxury amenities, and its energy saving system.

The latter represent the ideal way ahead for all new build homes in the future and must surely play a role if Britain is to achieve Net Zero for carbon emissions, but Nic explained why he thinks it’s a long way off before volume builders adopt such technology: “If they had to add ten thousand pounds to every unit, it makes a big difference to them, and they’re not going to do it – that would cut their profit margins, so they won’t do it unless the Government says they have to.”

“We’re slightly different,” he asserts. “We know that if we spend the money, we can get it back in the price.” Despite the firm’s strong positioning, London’s less than ideal market currently has however posed challenges: “At the end of the day, we want to sell but the market is very difficult at the moment – we’ve rented three of them already, but we are keeping the two corner ones up for sale.

“We’ll wait for a few years, see what happens, and put them back on the market – and you never know, one of the tenants might want to buy it in the future.”

This kind of flexibility, along with the firm’s end-user focused ethos, has obviously served it well – winning NLondon a clutch of awards over the years, from LABC and RSA accolades to Green Business of the Year.

This has not led Nic to sit on his laurels however; he is actively trying to improve things in the industry, having sat on the panel for the Home Builder’s Group, working within the FMB, and being repeatedly involved in lobbying government.

Whatever can be expected of the Government’s future policy for incentivising eco-homes and leveraging planning for smaller sites – if Nic has any influence on the direction of travel, housebuilding could be in for a greener future. 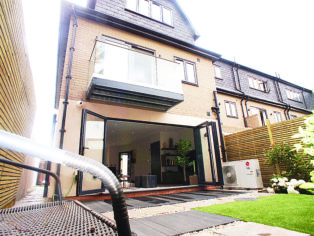