3 Church Road London – Once thought never to be

Sometimes a site appears so complex that one wonders if it is destined never to be developed at all. The 3, Church Road site in Ealing, appeared to be just such a proposition until Autor Architecture got hold of it, reports Michael Willoughby:

The creation of what is now 29 mixed private and affordable properties on a site of a former nursing home, had been refused by Ealing Council, who came up with no fewer than 48 separate objections on two separate occasions. They disliked everything from design, overlooking, noise, access, parking, pollution and massing.

The proposed site has two different characteristics. The front portion occupies a prominent corner position on Church Road facing the three Churches: The Church of our Lady, St Mellitus Church and Hanwell Methodist Church in a linear, 300m stretch. The 20m wide and 100m long back part of the site stretches across the 31 rear gardens of Church Road and Balfour Avenue.

At the front, the site’s complex constraints reduce the buildable area to a third. These include the front boundary that forms a non-continuous radius, a substation and five root protection zones that penetrate into the site by up to eight meters. Additionally, the neighbouring properties are two-storey and do not give any hint toward useful building lines or height references. At the rear, site constraints include overlooking, overshadowing, overbearing impact, noise, privacy, amenity space and site access.

All this made it a difficult proposition financially: the development had to be four storeys high to stack up. If that wasn’t enough, during 2008, the financial crisis hit and the site sunk even further underwater. The developer was forced to sell the front proportion of the site to Thames Valley Housing Trust, with a subsection managed by Inquilab, a smaller housing association with less experience of developing in the borough.

“The sites constraints in the context of the financial crisis made it a challenge to provide successful place making architecture at the financially necessary density level but without compromising the identity of the area.” says Autor MD, Frederic Paulus Akuffo.

At the front, the site’s complex constraints reduced the buildable area to a third. These include the front boundary that forms a non-continuous radius, a substation, and five root protection zones that penetrate into the site by up to eight meters. Additionally, the neighbouring properties are two storey and do not give any hint toward useful building lines or height references. At the rear, site constraints included overlooking, overshadowing, overbearing impact, noise, privacy, amenity space and site access.

It fell to him to maintain the profitability of the site while checking off each and every one of the objections.

To gain approval, he says: “the applicant has to win 48 times; the council only once.”

The hearing took over eight hours and involved more than 15 residents from three different wards. Meanwhile, the client team brought eight different consultants to give evidence.

“It was the most difficult we have ever worked on since there was a requirement for maximum density, while the council and local residents pressed very hard for non-overdevelopment.

When selling the front block to TVHA the scheme had to be further increased in size by about 10 per cent to comply with the new GLA space standards. The council used this minor material amendment application as a chance to condition the full material pallet in two consecutive committee meetings. The result was a high-quality development.

“The council not only requested high quality material samples of the brick and cladding elements, but also summoned 1:1 build samples of the balustrades, windows and louvres to the committee meeting.”

He says the housing association’s contractor tried to argue with the decision and the materials but was refused. In retrospect, the 48 reasons for refusal look suspiciously like an overwhelming desire on the part of the council not to have anything built. Indeed, the appeals inspector awarded the appellant to have parts of the appeal cost covered by the council for ‘unreasonable behaviour’.

That meant the real work on Autor’s behalf came in creating an overriding narrative to move the scheme through the planning system.

The story the architect told was of providing a link in a dense urban fabric dominated by two great “ways” – an ancient and extant Roman high street in Uxbridge Road – and an emerging new road in the form of Crossrail.

According to Autor’s view of the local area, the scheme at four floors – where three wards and their churches join – can establish a new axis within the existing urban fabric. As such, the development is oriented with the three existing churches and acts as a bridge between the historic layers of the immediate area.

Finding a balance between the density requirements of the area involved the architects negotiating the building envelope through the principle of what they call ‘geometric design blueprints’ that can flexibly respond to the constraints matrix of the site while at the same time acting as an efficient construction grid on this complex site.

The design of the front block is based on three stepped squares linked to the scale of the neighbouring structures and different on each elevation. So, in effect, the scheme uses height to link points in the area and stepped rhombi to respond to the site constraints. To the rear, the mews houses are set out on a multiple of seven degrees to rationalise construction elements, while maximising outlook levels but minimising overlooking. At the same time, the layout breaks down and gives rhythm to the 100m long elevations.

Sinking the mews 1.5m below ground level allowed the kitchen windows at the front to be moved beneath eye level view of passing pedestrians. At the rear, the sunken help to reduce noise levels in relation to the 35 neighbouring properties.

The project’s layout is a stepped single-aspect where a GLA definition is used – because the Agency defines a corner unit as dual-aspect – making it a winner here since the team could include more efficiency into the scheme.

To combat the potentially poor ventilation and bad outlook which is a peril of single aspect dwellings, the team worked hard to create sublime outdoor spaces. These are various spaces delineated as “retreats” in terms of amenity space within the site.

This is unusual because front gardens are not usually for amenities, but the presence of the two 15m high trees made for a restful area the team called “The Poet’s Garden.”

The back amenity, such as communal rear gardens with a play space, communal front gardens shaded by the protected trees, and three roof terraces, step down towards the rear from four stories down to two stories. The front is monumental to be in line with the churches while the rear steps down to link itself in terms of greenery and volume with the smaller scale residential gardens.

“is to pursue maximal density to facilitate a viable development while creating a design whose identity is integral to its neighbourhood.”

“We managed to turn the schemes’ taxing constraints into opportunities by using what we called a Relationship matrix,” he continues. “Due to the onerous amount of constraints we looked not at the constraints in isolation but at their relation towards each other.”

At the front the huge Class A trees that on the one side reduce the buildable area can actually be used to shield and step the scheme linking it with the prevailing neighbourhood. Translating these relationships into building resulted in an architecture that is inherently generated from and linked to its place and community.

Meanwhile, every apartment has a 1.5m GLA-compliant balcony enclosed so as to provide more shelter on the busy Church Road and limit overlooking onto neighbouring properties. These are enclosed in clad volumes with semi-pitched roofs which correspond with the sloped roofs of neighbouring properties. The three projecting volumes correspond with the three churches in the area – linking the building to the architecture of the area.

The cladding was another stand-out element – glass-fibre reinforced concrete called ‘Rieder – Öko Skin’ which gives a rough finish like stone. The methodology became known from its use on the South African World Cup Stadium. But Church Road marked the first time that a timber patterned application had been used in on a development in this country.

The mews houses are built using a hybrid cross laminated timber (CLT) system, combined with a TGI timber cassette system. This system detailed with Autor who specialise in prefabrication is Pinewood’s first application in the UK minimising the construction cost compared to conventional CLT Systems and enabling an efficient, sustainable construction process an the constraint back-land element of the site.

Environmentally the scheme is up to Code 4 and includes solar panels as well as a decentralised heating system. Each flat has its own heat-exchange unit. The property features aluminium double-glazing and is 10 per cent wheelchair accessible as befits its funding by the HCA.

Following a very difficult birth, Ealing Council was so happy with the scheme that they paid to have it submitted it for the New London Design Award 2014, after it was already shortlisted for the Housing Design Award 2012.

In her committee report, Juliana Conde, the council’s urban design officer for the council, dubbed it:

“A high quality design that is a specific, well thought response to the numerous constraints of a very difficult site and succeeds in creating attractive buildings, that have a strong character.” 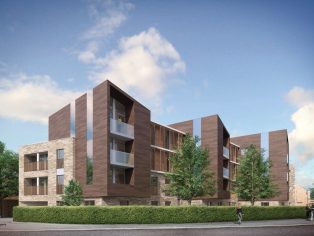 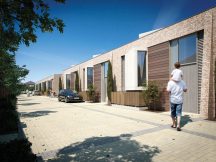 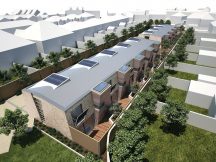