Burton-upon-Trent based ventilation systems manufacturer Vortice set up business in the UK in December 1977.  After 20 years in Italy, the parent company, which is based in Milan, made the decision to start supplying domestic, commercial and industrial ventilation systems in the UK, which proved to be a huge success.

To celebrate, Vortice will be running a series of promotions based on the 40th theme, for the six months up until December. General Manager Kevin Hippey said:

“40 years in business in the UK is an exciting milestone for us.  Vortice started with a core range of ventilation products, establishing itself as a renowned manufacturer with some of the most energy efficient, beautifully styled ventilation products in the world.”

Vortice was originally founded in Milan, Italy by Attilio Pagani in 1954.  Pagani’s first product was a cooker extraction unit made of thermosetting resin. This innovative idea won a Compasso D’Oro, the oldest and most authoritative design award in the world.  The visual impact of Vortice products has set it apart from the competition ever since and one of Vortice’s original fans proudly sits in the Museum of Modern Art in New York. 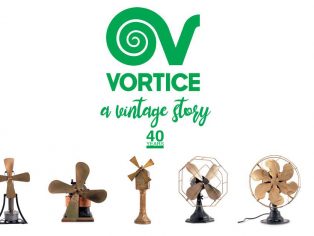